The STEM sectors are growing rapidly, and with reports now showing over 1 million women working in STEM occupations in the UK (2019), that still only equates to 24% of the reported workforce. If trend data is correct, this figure won’t even hit 30% by 2030.

Engineering has been a male dominated sector since day one and is the STEM subject that is struggling the most to increase their gender diversity across the board. Only 12.37% of engineers identify as female (2018) compared to 42% in science and 21% in tech. This is the lowest percentage across Europe. Research suggests that while gender is still the main factor relating to engineering aspirations, science aspirations are influenced by a growing number of factors — which highlights a big reason why the engineering sector is struggling to diversify. 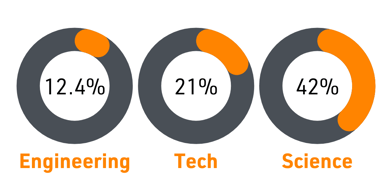 However, research also suggests that 46% of girls aged 11-14 would consider a career in engineering.

So why is there such a big difference in these numbers? 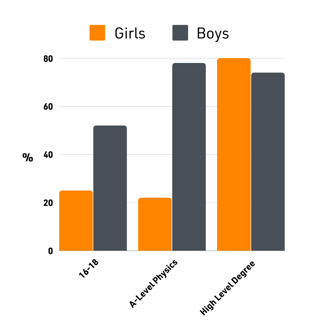 Engineering UK report a huge decline in this number by age 16. Only 25% of girls aged 16-18 would consider a career in engineering compared to almost 52% of boys of the same age, and only 22% of A-Level Physics students are female.

Despite this, in all STEM A-Levels (except chemistry) girls still achieve more A*-C grades than boys. This trend continues into higher education, with almost 80% of female engineering students achieving a First or Upper Second compared to only 74% of their male counterparts.

According to the Engineering UK report of 2018, over 60% of female engineering graduates go on to enter full time work, which is higher than the female graduate average of just 58%.

So how is the UK workforce still only 12% female?

Some research suggests that although female students tend to enter University higher educational qualifications than males, they may be still be at a disadvantage in their studies as they are not likely to have been in any engineering-related employment, whereas the men have. This means that the curriculums constructed may be harder for them to process as they assume that the majority of students have an engineering-related background and will understand commonly used engineering terms and possess already. This could lead to increased rates of drop out in female students. 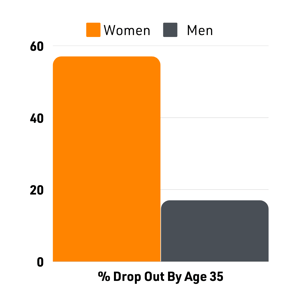 But it’s not just university that they may drop out from. The Royal Academy of Engineering reported in 2020 that 57% of female engineers drop off the register for professional engineers by age 35. This is compared to just 17% of males, suggesting there are some important workplace factors that need to be addressed.

One of those factors may be the inherent gender bias in hiring female engineers vs. males. Although representation is on the rise, gender bias and discrimination does still exist and is even perpetuated by those who think that it isn’t happening. Recent studies have identified that males are still thought to be most competent in engineering roles and were on average assigned a $3475 higher salary, subconsciously creating an 8% wage gap.

In reality, the reported UK wage gap (2020) between women and men in engineering by The Royal Academy of Engineering is higher than that at 11%, which may be another factor contributing to the low number of women in engineering.

Engineering does have a “leaky pipeline” as it were, and the issues causing this do still need to be addressed as we continue to encourage young girls to take up roles in engineering, because without this the percentage will not continue to grow.

Below are some resources we can all use to encourage girls into engineering!

In some professions, women have become well represented, yet gender bias persists—Perpetuated by those who think it is not happening | Science Advances (sciencemag.org)

Get the latest articles straight to your inbox.

Free delivery on orders over £50

Get free delivery on all orders over £50 Inc VAT. Simple.

All our payments are PCI compliant to keep your